Give and Take – Why Helping Others Drives Our Success

Give and Take – Why Helping Others Drives Our Success 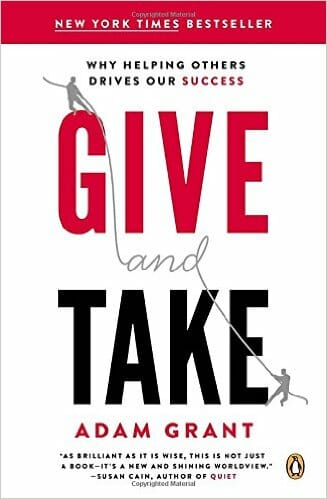 Stop for a moment and think about the typical person who rises to the position of CEO or any other C-suite position in the for-profit world. What are some of the common attributes of this person? How does he or she get this lofty position? Now, consider the axiom of “Nice guys finish last.” Do you think this is true?

Adam Grant, an organizational psychologist and Wharton Business School professor, has initiated a number of studies and looked at other research trying to answer the ‘nice guy’ question. Grant’s best-selling book, Give and Take – Why Helping Others Drives Our Success is a roadmap to true success for leaders, followers and everyone in

Let’s first start with those who tend to stay at the bottom of the corporate hierarchy. It turns out that these are your ‘givers.’ According to Grant, givers are not concerned with reciprocity. Their default style is to focus on the needs of others. They tend to be generous with their time at work and are unlikely to decline calls for help from co-workers. For the givers that don’t climb the corporate ladder, they can burn out from all this giving. In many cases, others take advantage of them and drain them of time, energy and the ability to move up.

If givers make up the majority of the bottom of an organization then who might be at the next level and make up the middle? Grant says that it’s the matchers and the takers. Takers are defined as people who like to “get more than they give.” Their own interests are put ahead of others and they see the world as so competitive that it’s just “dog eat dog.” Matchers, on the other hand, are focused on reciprocity. They want an even exchange of favors or, tit for tat. For them, it’s about fairness.

A couple more thoughts on takers…

So, if givers tend to be at the bottom of the hierarchy and matchers/takers are in the middle, who is at the top? It turns out that it is the givers, again. In short, it is the givers that learned how to avoid being doormats while rising to the top.

“It is well to remember that the entire universe, with one trifling exception, is made of others,” John Andrew Holmes

If all this taking is getting in the way of our personal and professional advancement, how exactly can we be givers without become doormats? This is probably the greatest benefit of Grant’s writing. There are some very specific actions that any of us can take to reap the benefits of giving.

Grant offers a theory that most givers ‘suffer’ from some level of pronoia – the delusional belief that other people are plotting their well being. What’s interesting, however, is that it just might be their reality. Grant shares a number of stories about real-life givers where years of giving resulted in tremendous opportunities. The stories give ‘what goes around, comes around’ new meaning. In short, people like to root for givers and destroy takers.

And, my challenge to you…imagine a culture of givers and help-seekers where psychological safety reins and winning doesn’t mean someone else is losing.