Turn the Ship Around! – A True Story of Turning Followers Into Leaders

Turn the Ship Around! – A True Story of Turning Followers Into Leaders 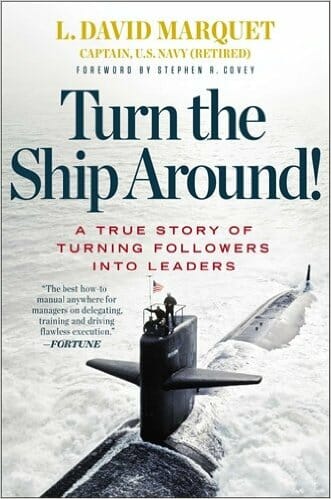 Take a quick guess at how many management and leadership books are listed on Amazon.com. The answer: over 1.1 million. It’s a little overwhelming, to say the least. And, while there are many excellent books on these two subjects, David Marquet, (retired US Navy Captain) may have just cracked the code and could change the way that you think about leadership, management and maybe even parenting, forever.

In August of 2015, a participant in an accountability workshop that I was facilitating came up to me during a break. He asked me if I wouldn’t mind showing a short video of Marquet talking about how to make others more accountable. I had not seen the video and I decided to take a chance. I was hooked when Marquet started talking about giving control to his crew. I found a couple of other videos of Marquet talking about his experiences and eventually bought Turn the Ship Around!, reading it over a weekend.

The foundation of Marquet’s theory is that we need to reconsider the “leader-follower” paradigm. This worked through most of the modern history when all we needed was the output of someone’s hands or the strength of their back. When things are going well, “leader-follower” is incredibly seductive. Marquet writes, “It is precisely the success of the top-down, leader-follower structure that makes it so appealing. As long as you are measuring performance over just the short run, it can be effective. Officers are rewarded for being indispensable, for being missed after they depart. When the performance of a unit goes down after an officer leaves, it is taken as a sign that he was a good leader, not that he was ineffective in training his people properly.” Instead, consider that everyone is an autonomous individual and start thinking “leader-leader.”

After considering this new foundation of everyone as a leader, Marquet suggests a three-point model: Control, Competence and Clarity

At the heart of Edward Deci’s model of motivation and well being are autonomy, competence and relatedness. Deci concludes that while being competent in what you do and loved by others is critical, autonomy trumps them both, in the end. Marquet rightly concludes that this is the heart of his theory, as well. In fact, after one highly visible mistake he made while telling the Navigator to increase the sub’s speed, he vowed never to give another order.

He replaced orders with intentions. After meeting with his officers, he put the word out that everyone on the sub was now a leader and to effectively run the ship, those at lower levels of the hierarchy would now say, “I intend to…” when it was time to check a valve, submerge the sub or fix a problem. This was not just another empowerment program, as Marquet sees them as fundamentally flawed because they start with the assumption that one person is giving power to another. This rhetoric ends up being disempowering for a variety of reasons.

Letting go of Control doesn’t work very well if your team is not capable of doing their jobs. In fact, pushing Control down the ladder puts more of a burden on technical Competence. Marquet and his crew became relentless about training and feedback.

One of the most important things a submarine can do is stay quiet and listen for other activity under and above water. It is not completely uncommon for crew members to accidentally open a valve too quickly which can cause problems with silence and detection of other vessels. One day, Marquet told me, he walked around the ship and started telling everyone to begin self-reporting their mistakes. “Would you rather that we came hunting for your mistakes? Do you like that?” he said. Marquet would literally walk down to any crew member that reported their own mistake and congratulate them on the spot in front of their peers. It quickly became not only acceptable to self-report but part of the culture. And, the ship got quieter, much quieter.

People in leadership positions often tell me they want their employees to think and act like leaders. Don’t wait for marching orders. Make decisions and take calculated risks. This is only possible if employees know the organization’s vision, mission and values by heart. Having this information gives employees the criteria by which to act and make decisions.

Marquet recommends a number of actions that can be taken by any leader and a make a great deal of sense for just about any organization:

Last weekend, my oldest son (12) came to me and asked, “Dad, can I play Xbox?” I paused, looked at him and didn’t answer. Then, he said, “Dad, I intend to play XBox. I have been reading a lot this morning. I got some exercise and all my chores are done.” My reply: “Very well.”

If you’re in the market for an innovative way to shake up your leadership style and your organization is under-performing, this is a must-read for you. Turn the Ship Around! is a simple, proven leadership book that confirms you don’t have to be the greatest leader to bring out the best in your people. 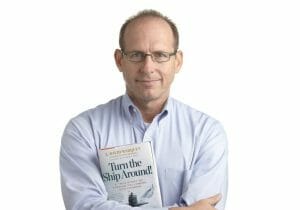